Start a Wiki
A Death In The Family 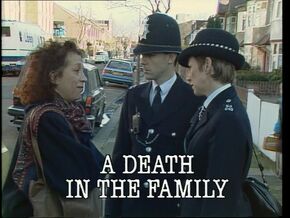 Written By
John Foster
Directed By
Christopher Hodson
Episode Chronology:
Previous
Repercussions
Next
In The Frame

P.C. Taffy Edwards and W.P.C. June Ackland are talking to a lady when they become aware of shouting further down the road. They go to investigate and find a man holding his dead baby. Ackland takes the baby back into the house, but her attempts to resuscitate the child are unsuccessful. This is not the first time the family has lost a baby. The daughter blames herself. A lady is at the front desk talking to P.C. Tony Stamp about the non-arrival at school of her ten-year-old son.

Retrieved from "https://thebill.fandom.com/wiki/Episode:A_Death_In_The_Family?oldid=34548"
Community content is available under CC-BY-SA unless otherwise noted.