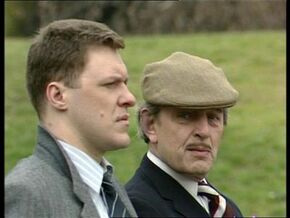 Written By
Barry Appleton
Produced By
Michael Chapman
Directed By
Christopher Hodson
Episode Chronology:
Previous
The Drugs Raid
Next
Rough In The Afternoon

A Dangerous Breed is the 7th episode of The Bill. PC Litten, seconded to the CID, finds himself duped when two boys he collars for a burglary are set up by his informant for reward money.

PC Dave Litten is on secondment to CID, and is desperate to impress his boss, DI Roy Galloway. Galloway and Litten are about to have a meal at the local pub when a call comes through that a valuable necklace has been stolen from a local aristocrat, Lord Barstow-Smythe. Traffic problems hold them back as they race across Sun Hill trying to get there before the "woodentops". With Galloway and DS Roach busy, Litten talks to a local reporter and ends up mentioned in the local paper. Shortly afterwards, he is contacted by a mysterious stranger who offers to locate the burglers if Litten can convince Barstow-Smythe's insurance company to pay him the reward up-front. The Stranger then sets up two young lads to take the fall for the theft, and Litten proudly arrests them. Galloway recognises the MO of the case as that of a notorious conman, and lambasts Litten for his stupidity.