DS McAllister arrived at Sun Hill during the aftermath of the Don Beech Scandal. A schemer who often took credit for the efforts of others, she dates Tom Chandler in an attempt to sleep her way to higher rank; falling pregnant with his baby, she eventually marries him. The efforts of DCI Jack Meadows and DC Mickey Webb to bring down Chandler for the rape of a young woman years before culminates with him holding a gun to Debbie as she goes into labour two months early, with Meadows in the room. Tom shoots himself and Debbie is rushed to hospital. She makes a choice not to keep her son Andrew, but eventually changes her mind.

Soon afterwards she begins a lesbian affair with fellow Sun Hill officer Juliet Becker. The two women initially bonded after working on a case together and became close after Juliet offered to console Debbie after she witnessed a person die in custody. Debbie tried to kiss Juliet in the Locker Room but Juliet pulled out and told Debbie she should take more time to consider if she wanted to start a relationship with a woman. Debbie managed to seduce Juliet in the toilets. The two women had sex after a party and soon after began a casual relationship. After Juliet's murder, Debbie began pursuing a relationship with Meadows. However, she finally decides to leave the force to look after her son, and strikes out on her own.

McAllister and her girlfriend.

McAllister and Juliet Becker during an intimate moment in the bathroom. 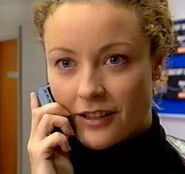 Debbie on the phone.
Community content is available under CC-BY-SA unless otherwise noted.