The crime car was used to cut down on street robberies in Sun Hill.It was used in the 2000 episode 'Wheels'.

In a bold new initiative, Ch. Supt Charles Brownlow unveiled the "Crime Car". This was a high performance (V6) unmarked Volvo S40 designated Sierra Oscar 1-1. The crime car would react and be tasked to crimes in progress or crimes that had only just taken place. What made the crime car different, apart from its speed was the crew. Unlike most vehicles with two officers, the crime car would have a driver, uniformed officer and a member of CID on board, thus making them well placed to deal with all manner of crimes.

Tony Stamp, an officer with arguably greater experience in area car and high speed driving laid rightful claim to the driver seat and was shocked to find it occupied by PC Vicky Hagen. The remaining crew members were Sgt Matt Boyden and DC Tom Proctor.

Though the concept of the crime car should have worked out well, it sparked a lot of rivalry with other officers, not least of which the TSG (Tactical Support Group). For amusement, the TSG had impounded the car for being illegally parked earlier in the day. Back behind the steering wheel both Vicky Hagen and the TSG respond to the assault on Tom Proctor, both anxious to get there first. Sadly, this resulted in a nasty PolAcc (Police Accident) and the crime car was damaged beyond repair, though crew were unhurt.

Meanwhile, back at Sun Hill station, Charles Brownlow is anxious to show off his new initiative to the borough commander, Guy Mannion. Unfortunately, this plan backfired as the smashed up Volvo is towed back into the yard for borough commander Mannion, Ch Supt Brownlow and all to see. PC Tony Stamp was overjoyed at this development.

The concept was scrapped under instruction from Guy Mannion and the car was never replaced.

The car was used in only one episode , Wheels, it was removed because it crashed and was recovered in front of of the then Borough Commander, Guy Mannion, and he told Charles Brownlow not to use it again.

The Volvo used for the crime car is a real. It can be found in scrap yard in Chester, its final resting place after the episode. 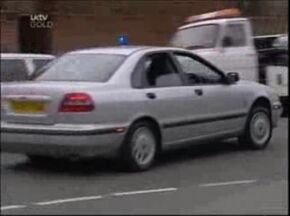 The vehicle details for T905 PDA are:

Vehicle Status - Licence Not Due

Retrieved from "https://thebill.fandom.com/wiki/Crime_Car?oldid=33689"
Community content is available under CC-BY-SA unless otherwise noted.