Area Cars are large 5-dr hatchbacks used in pursuits from The Bill's beginning in Woodentop to the end in Respect: Part 2. They are fast for speed and stable in handling, making them the perfect pursuit vehicle. They can only be driven by specialist Area Car Drivers, who must pass an advanced driving test in order to undertake Area Car duties. As the most powerful vehicles in the fleet, Area Cars feature in many of the shows most memorable chase scenes.

From 1984 to 1997, the Area Cars featured prominently in the title sequences:

Most of the Area Cars used in the series production were normal filming prop cars, but the production team did have two genuine police cars bought especially for the show from the real Metropolitan Police, both Ford Sierras. One was F161RUL, which did not actually appear in many episodes, the other was K923ARX. Some sources claim that the two cars were one and the same, it having been repainted and accessorised to resemble a newer model; however this may not be true - on the DVLA Vehicle Enquiry site, both of these cars are shown as separate vehicles which have been on the road concurrently - at the time of writing this information, F161RUL was still in use with a valid MOT until April 2020, whilst K923ARX has been not been taxed and tested since 2005 when it went into a private museum collection and still makes public appearances at some automotive events. It is also illegal to register a car with a registration number issued after the car's year of manufacture, further evidence that these claims are untrue. 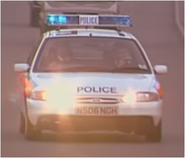 A Vectra Area Car and a Focus IRV chasing a suspect

Retrieved from "https://thebill.fandom.com/wiki/Area_Car?oldid=37065"
Community content is available under CC-BY-SA unless otherwise noted.